Start a Wiki
The Suffering 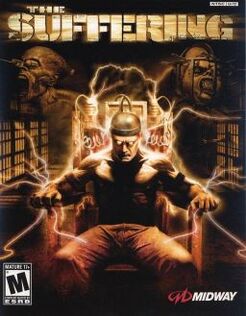 The player controls Torque, a man who has been sent to Abbott State Penitentiary on Carnate Island, Maryland. Torque has been convicted and sentenced to death for murdering his ex-wife and two children, although he claims to have blacked out at the time this happened and cannot remember anything. The night Torque arrives, there is a powerful earthquake, which releases an army of monsters upon the facility. Torque's cell door breaks and he is freed from captivity. Starting from his cell, Torque traverses the prison in an attempt to escape Carnate Island alive.

During the journey, Torque finds that the monsters set loose personify the many forms of execution the island has played host to. In addition, he is met by the spirits of some of Carnate's most famous residents: the deranged psychologist Dr. Killjoy, the former executioner Hermes T. Haight, and the regretful murderer Horace. With their help, Torque discovers that he can transform into a raging monster himself (other characters assert that these "transformations" are merely a sort of adrenaline-fueled madness). Killjoy is obsessed with curing Torque, though his methods are questionable, and at various points delivers vague medical advice. Horace and Hermes, on the other hand, try to sway Torque towards good or evil, respectively. Torque meets several other characters along the way, whose fate is variable. For example, he can team up with a corrections officer while traversing the island's forest.

At the climax of the game, Torque is confronted by visions of his deceased family. Depending on the player's actions, they will either forgive Torque (because it was not him who murdered them) or blame him for their troubles (because it was him, either in whole or in part). After facing his inner demon, himself, and a monster born of his hatred, Torque is found by a rescue boat, though his fate past this point is dependent on what his family thinks of him. Depending on his actions, Torque will: be rescued and get a re-trial; knock out the driver and escape; or become his inner demon, kill the driver, and run back into the island.

The Suffering plays as a traditional first or third-person shooter, employing the controls of the former but allowing players to switch between the two camera angles. The weapons provided to the player are reminiscent of those found in prisons: shivs, revolvers, Molotov cocktails, and a wide array of less common weapons.

In the game, the player is presented several opportunities to test their morality, usually in the form of a person who is trying to survive the horrors of the island. In most cases, the player is presented with three options: help the person (good), kill them (evil), or remain indifferent to their plight (neutral). A hallucination of Torque's wife will attempt to convince him to take the good path in the obvious cases, while demonic voices attempt to coerce Torque into being evil. Good or evil, if done correctly, are indicated by the reaction of Torque's wife, while being indifferent has no response, as it is accomplished by getting someone killed without direct responsibility. Not every moral choice has all three outcomes, nor are they always so clear cut; for example, in the asylum, Torque comes across a correctional officer who has lost his limbs and is slowly dying. Torque can kill the man to relieve him of his misery, which will constitute a good action, or leave him be, which constitutes a neutral one, but in no way can he perform an evil act in this instance. The decisions made in regards to these opportunities will affect the ending of the game. Torque's "morality level" is indicated by the picture of his family in the inventory, which gets cleaner with good acts and dirtier with evil ones.

Another feature of The Suffering is Torque's ability to transform into a monster after his insanity meter has been filled by killing other monsters. In this form, Torque can tear enemies apart and can perform a powerful shockwave attack. The more enemies the player kills in this form, the more powerful it becomes. However, the form has detrimental effects. The longer Torque stays within this form, the more damage it will do to his health. Allowing the insanity meter to run out will result in death. Torque cannot heal himself until returning to human form.

After completing the game a bonus level becomes available. Titled "Waiting to Die", the bonus is a prelude level that takes place when Torque first arrives on the island. After completing the level the game begins as normal. The commentary in the level, activated by touching a crow that lands in a corner of the holding area, explains this level was originally intended to be the first level, but was cut from the game for story purposes during production.

The Suffering has sold over 1.5 million copies.[1]

The sequel The Suffering: Ties That Bind was released in the United States on September 26, 2005 for the PS2, Xbox and PC. The sequel immediately follows up on the events of the escape from the prison. The choices made in this game will, if a save file is present, affect situations in the sequel.

On September 8, 2005, Midway and MTV Films announced that a film version of The Suffering was in development.[2] The film began production in 2006 and is scheduled to be released in 2012. It has been reported that Kyle Haarklau will write and direct. Stan Winston had signed on to design the monster effects for the film prior to his death on June 15, 2008. Actor Chiwetel Ejiofor was announced to play the lead character Torque.[3]

The game was released as freeware by the United States Air Force, but is no longer available.[4][5] Although it can be found on some sites still. [6]

On September 7th 2017, both The Suffering and its sequel, The Suffering: Ties That Bind, were digitally released on the PC video game store GOG.com (previously known as Good Old Games).[7]

Retrieved from "https://thesuffering.fandom.com/wiki/The_Suffering?oldid=5391"
Community content is available under CC-BY-SA unless otherwise noted.